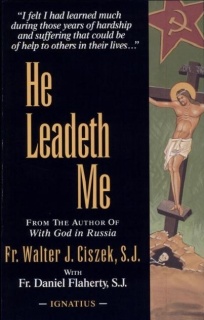 He leadeth Me by Fr. Walter J. Ciszek, S.J., is gripping and inspiring.  It’s the story of how an American priest felt called to Russia at the early part of World War II and how he spent 23 agonizing years in Soviet prison and the labor camps of Siberia.  Though he felt utterly called by God to minister in Russia, here is what he said about after he got there and saw the poor, desperate situation for what is was…

“This life is not what I thought it would be.  This is not what I bargained for.  It is not at all what I wanted, either.  If I had known it would be like this, I would never have made this choice, I would never have made this promise.  You must forgive me, God, but I want to go back.  You cannot hold me to a promise made in ignorance; you cannot expect me to keep a covenant based on faith without any previous knowledge of the true facts of life.  It is not fair.  I never thought it would be like this.  I simply cannot stand it, and I will not stay.  I will not serve.”

But he changed his mind.

One day God granted him “the grace quite simply to look at our situation from his viewpoint rather than from ours.  It was the grace not to judge our efforts by human standards, or by what we ourselves wanted or expected to happen, but rather according to God’s design.  It was the grace to understand that our dilemma, our temptation, was of our own making and existed onl in our minds; it did not and could not coincide with the real world ordained by God and governed ultimately by his will.”

All donations to the ministry are tax-deductible.